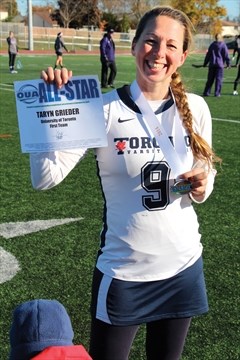 COBOURG — Growing up in Cobourg at a time when playing lacrosse wasn’t an option, Taryn Grieder honed her skills first while playing hockey.

It wasn’t until she went to the University of Toronto 14 years ago that she took up lacrosse at the age of 19, which she admits was pretty late to take up a new sport.

“I started pretty late but it was really a natural transition because it’s a really good combination of hockey and tennis, which I played so I have the hand-eye co-ordination,” she said.

Fast forward to 2015, a year Grieder was named as the head coach of the U of T’s Varsity Blues women’s lacrosse team and helped Team Ontario bring home a box lacrosse championship win from Calgary, and it’s clear to see that her transition to the sport was the right one.

“It was really cool,” she said looking back on her performance in the senior division at the Canadian female box lacrosse championships, held in Calgary this past July. “We ended up doing pretty well during the week with two losses and four wins.”

After losing those two games to Team Alberta by just one goal, her team got one more chance to face off against the home team that week in the finals, where Team Ontario won 7-6 in double overtime, said Grieder.

“We were down by one goal the whole game, but kept coming back and tying it,” she said. “We ended up going into overtime which wasn’t sudden victory. We scored a goal and they scored with 20 seconds left, so it went into sudden death for a double overtime.”

Asked about her transition from player to head coach at U of T, she said she is glad to still be involved with the program.

“I have been with it so long and I love it so much, so I was really sad to finally be done and not be able to play any more,” she added.

Before taking over as head coach of the women’s lacrosse team in May 2015, Grieder capped off a seven-year playing career with the Varsity Blues.

According to U of T, the three-time OUA all-star and five-year team captain led the school to three OUA bronze-medal finishes — while becoming only the second head coach in the program’s history following long-time head coach Todd Pepper.

When she is not involved in lacrosse, Grieder is a course instructor in the human biology, cell and systems biology and psychology department at U of T, and the department of psychology and Chang School of Continuing Education at

She holds a bachelor of science degree from University of Toronto Scarborough, a PhD from the Institute of Medical Science at U of T and a master’s of education and bachelor’s of education.

Asked about the one thing she looks forward to the most as head coach, Grieder said the focus is on improving on last year’s results and hopefully dethroning the team from the University of Western Ontario, champions for the past six years.

“If we can dethrone Western that would be amazing,” she said.

Having served as team captain for several years, she said she knows her team well and has been involved in recruiting new players from Canada and abroad.

“I know what I like about it and I know what I want to change about it,” she added. “We have a new goalie coming in and a couple of players from overseas who are coming to study at U of T.”