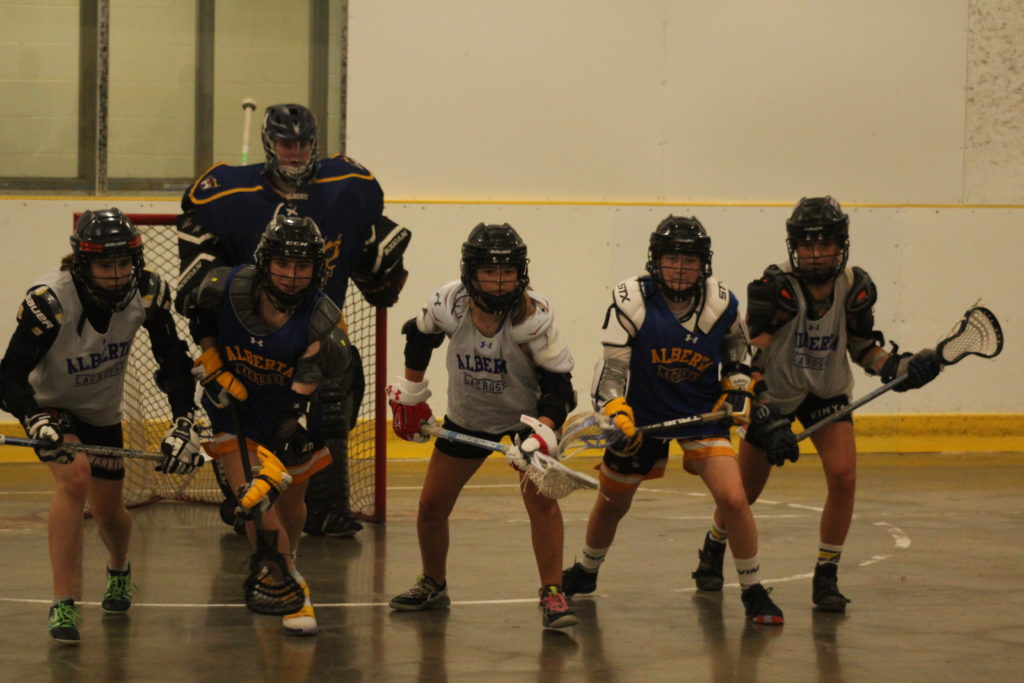 I was mesmerized watching my first box lacrosse game. The Georgia Swarm’s arena was packed, the music was loud, and the cheesesteaks were delicious. My best friend Alex and I had made the quick drive out of Atlanta for a girl’s night filled with lacrosse action, and it even included a surprise performance by Atlanta’s own Ludacris. Armed with a new curiosity for this side of the game, I was thrilled when the US Box Lacrosse Association offered me the opportunity to cover their Nationals event in 2018, as it would be the first year that the event included tournament play for girls teams. That was my first chance suiting up and playing box lacrosse. And I absolutely loved it.

Historically, “box lacrosse” for me had meant playing 5 v 5 in an indoor rink during the winter. This continued when I moved to Atlanta, where I’d pick up my stick and hop in for indoor games when the weather got chilly. When a Facebook post popped up asking men to sign up to play box lacrosse, I decided I wanted to go for it too. I signed up, paid my fee, and gathered my box lacrosse equipment that I’d kept tucked away for an opportunity to play in an actual league. I was a little worried that I wouldn’t be allowed to play since it was technically “men’s box lacrosse,” but all my teammates were really kind and welcoming. They taught me the nuances of the game, fist-bumping me on goals and making me feel like I was another member of the team. That’s exactly what I wanted. I have lots to learn as a newbie, but I consider myself so lucky to have the opportunity to play box lacrosse and I’m itching to see how it will translate to the field this Spring.

As I have learned more about box lacrosse and its origins, I have come across young women that have played box lacrosse their whole lives in other regions! I want to highlight some of the amazing players I have had the chance to meet, and hopefully inspire other players out there to give box lacrosse a try. Though box lacrosse traditionally and professionally has been seen as a game that men play, I think it’s important to show that women can and are actively playing too, and that some are even playing at the highest ranks (more to come on that later!).

I recently had the opportunity to connect with players from Team Alberta’s U17 team, and knew I wanted to use my platform to share their story. Team Alberta is a provincial team made up of girls from local teams in the area who come together to play at Nationals events. This collaboration between a great group of local clubs and associations has built a valuable opportunity for girls to play lacrosse competitively with teammates old and new. Not only are the girls of Team Alberta an inspiring group, but box lacrosse is ingrained within their lacrosse culture. For them, box lacrosse is not a novelty or something “just for boys,” it is for everyone.

For Ella Royer, class of 2022, box lacrosse has always been a family affair. She started playing at six years-old with her brothers and was coached by her dad. Her teammate Emily Dodd ‘22, picked up box lacrosse from her older sister, who would use the time indoors as an opportunity to stay in shape during the off-season, before field lacrosse started up again. Logen Davis ‘22, also found box while looking for an opportunity to stay fit during the off-season, and quickly found herself immersed in the game. It quickly clicked for me that no matter when or how we all found box lacrosse, we quickly discovered a passion for it that made us want to keep playing. Interestingly enough, the players spoke of how many players, both male and female, in their region started off playing box lacrosse before transitioning to field lacrosse at a later time. What seemed like an other-wordly version of the sport to me is actually the norm for many young women in Canada, and I was fascinated by this because of the barriers I had seen for girls within the United States looking to play too!

Boys box lacrosse leagues were taken more seriously, especially with the consideration that the professional box league, the NLL, is 100% male. Recently, an all-female box lacrosse league was launched in Calgary to ensure girls could receive high-level training and skill development opportunities. For Emily, this was “a crucial first step in changing the narrative that box is a game only meant for boys.” Regardless of any roadblocks faced here and there, the young women in Alberta have persevered, winning many league and provincial championships! By setting a standard of excellent play, Alberta Lacrosse has created opportunities for more young women to play box lacrosse and find success within the game.

Though box lacrosse requires more equipment and allows for a more aggressive style of play, the mechanisms of passing, shooting, and catching are very similar to field lacrosse. For the girls from Team Alberta, playing box can be an advantage, especially when the field game becomes a little chippy. With experience playing in high-intensity and aggressive games already, the players are never shook up and use that toughness to their advantage. The “fast and exciting” pace of the game pushes players to be quick on their feet (no pun intended), sharpening their decision making, ball handling, and footwork skills as well as strengthening their resolve. And one of the best parts of box lacrosse? Logen likes that it is “pretty much the same for both male and female,” citing the similar styles of play as a positive.

I believe we can all learn a lot from box lacrosse, and the opportunity for players to heighten their field lacrosse skills by playing in even tighter quarters in a different setting can truly help expand their game. Because box lacrosse has the same rules for all leagues regardless of gender, it can be easily adaptable and there’s no stress on the nuances of what could be considered “better” or “worse”! And as someone who’s only option is to play with a team of men, I simply consider myself as a box lacrosse player, without the “women’s” attached to the front in the way field lacrosse is traditionally referred to.

So what words of advice does Team Alberta have for any ladies out there looking to step out onto the box lacrosse floor? Overcoming the fear of being hit is number one. I was definitely intimidated by the size of other players and the more intense play of the game, but once I realized I could catch and throw like anyone else on the floor, I knew I belonged there too! What I didn’t necessarily have in size or power, I could make up for with stick skills and game sense. Being pushed into the boards and more aggressive defense are part of the game, and I was never targeted more than any other player. Though it may be a challenge at first, box lacrosse offers the opportunity to add a new dimension to your skillset as a player and join a new community in the process! Opportunities for women of all ages to try their hand at box lacrosse are crucial for the growth of the sport, particularly box lacrosse in any region. I am inspired by the creation of all-female box lacrosse leagues that allow players to play in a safe and inclusive environment, and grateful for traditionally male leagues that do not discriminate against women looking to play!

In some regions, women are not allowed to play lacrosse. This comes as a shock to many, particularly with the rise in participation of field lacrosse by girls and women around the world.  This piece wouldn’t be complete without shouting out someone I look up to a lot, Rachel Vallarelli. Rachel is a professional women’s field and men’s box lacrosse goalie, breaking boundaries by simply being herself and pursuing her dream to play lacrosse at the highest level. Inspired by Ginny Capucchioni, the first woman to play in the NLL, Rachel’s box lacrosse career began in the Boston Box League and took off from there. Though she’s faced adversity throughout her career as someone “going against the grain” because she is a woman playing in a sport that hasn’t had many women take part, she has embraced this adversity and pushed forward regardless. With all the strong support she has received, Rachel has also had unkind comments and judgement come her way simply because she is a woman playing with men. Understanding that “when people make unsupportive or inappropriate comments, there is a reason for it,” Rachel chooses to instead focus on the pursuit of a spot on a National Lacrosse League team. I was saddened to hear that Rachel has encountered venues and arenas that do not allow women to play box lacrosse, because this sentiment mirrors many barriers women face in the workforce, sports, and in society altogether.

For her, this is a call to action for the community to work to truly make box lacrosse, and lacrosse at large, an inclusive sport for all. On the bright side, she has had “more people in [her] corner” than against her. From teammates and fans, the welcoming atmosphere goes a long way. From being invited to the NLL U.S. Elite Combine to showing her skills at the invite-only tryouts for the New York Riptide, Rachel is leading the charge and showing lacrosse fans worldwide that dedication and passion for the game should open doors for anyone, regardless of their gender. “Always know there are people supporting you and in your corner, no matter where they may be in life or location,” she said.

Women belong on the box lacrosse floor, and I am so grateful for everyone that has shared their perspective with me. Hopefully they have inspired you to pick up some pads and hit the box floor too! Anyone that knows me knows I love to break a glass ceiling, and I know the sport is in wonderful hands with Team Alberta and others leading the charge. Women and girls deserve to have options for which version of lacrosse they play, whether it be field or box lacrosse, just like our male counterparts do. Whichever version of the game we each love best, at the end of the day, it’s all lacrosse!