Girls’ Box Lacrosse is Bouncing Back 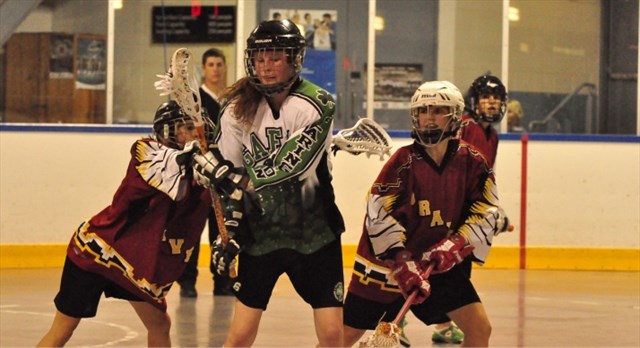 The Kitchener-Waterloo Minor Lacrosse Association has been hard at work promoting women’s lacrosse in Waterloo Region. Traditionally a sport for boys, the women’s lacrosse program has grown remarkably in a short period of time and continues to do so.

“In the 1970s, the sport of box lacrosse for girls died and was reduced even for boys. In the 1980s, girls’ field lacrosse became popular because there was a world stage. The first ever Canadian women’s field lacrosse team went to the World Cup in 1982.”

For the next two decades, field lacrosse had a presence. But in 2000, a group of those players and other lacrosse aficionados, including Pringle, who played on that 1982 team, decided they wanted to relaunch box lacrosse for girls.

They succeeded, and there are currently 15 centres with about 45 teams of female box lacrosse players at various levels, according to Pringle. Add to that the K-W Braves’ first ever girls box lacrosse team.

The club was eager to re-introduce box lacrosse to their field lacrosse program; it’s an indoor game played on hockey rinks during the summer and is perhaps akin to a combination of basketball and hockey.

Five of the box lacrosse players on Pringle’s team (between the ages of 11 and 14) also play on the Braves’ under-15 field lacrosse team, a solid squad coached by Lisa Collee which has a 5-1 won-lost record and is outscoring opponents 75-14.

“The best field players are box players because they get the stick-handling skills,” Pringle says. “We call them cross-over players and they can really improve our field lacrosse skills.”

It was last year that Pringle and KW Braves club volunteers hit the pavement looking for interested players. The return on their investment of time and energy was quickly rewarded. Earlier this month, Pringle’s bantams played in their first tournament – the Centre Wellington Girls’ and Women’s Box Lacrosse Tournament. The girls played Burlington, Six Nations, London, and Clarington, en route to winning the B division.

They finished in second place after round-robin play. But they capitalized on their experience, including a loss to a tough Clarington team, when they faced Clarington again in the championships and ended up winning 3-1.

“By pulling field and box lacrosse players together, we’re going to get more girls staying in the sport longer,” Pringle says. “It’s all about building the game for girls and making box lacrosse a mature sport again. We have good potential here and the bantam girls are aware that this is pretty special.”

Considered the largest box lacrosse tournament in the world, the event involves 231 games and 92 teams, including squads from California and the Czech Republic.

A long-time coach and former Braves’ player, Diebolt says his group of 13 and 14 years-olds will get a lot out of the tournament.

“Ontario is considered one of the premier areas for box lacrosse and this will give them some experience with how the game is played elsewhere,” says Diebolt, who took over the team four years ago. “It’s a great opportunity.”

The bantam Braves are considered one of the top box lacrosse teams for their age in Ontario, according to Diebolt. He believes that puts them squarely in the sights of other teams.

“They’ll be stepping up to compete with us. But we won’t change our system. We’ll play the same style of game we play here in Ontario.”