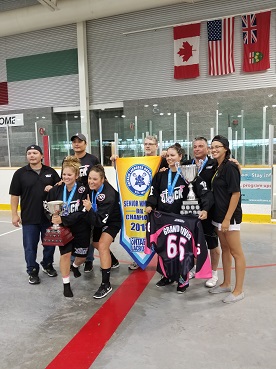 There were lessons learned this weekend, in some cases hard lessons, but provincials is always like that, even if a bit predictable.

In a season that felt like it might fly apart like some cheap facade in a sudden storm, the 2018 Provincials not only pulled the league out of the doldrums, but reset the stable foundation and reminded us why we do this in the first place.  There were lessons learned this weekend, in some cases hard lessons, but provincials is always like that, even if a bit predictable.

The semi-finals in the morning were a couple of curious affairs, by no means a sure thing for any team.  Toronto was in a replay of yesterday’s gritty tie with Grand River, and the Stars knew that a break or two here or there and the game could go in their favour. Grand River had other ideas in mind, and on the strength of  yet another timely scoring outburst, they put away the Stars 5-2.

The intrigue of the other semi-final saw a Niagara team, seeming having found it’s footing after a shaky start to the tournament, meet up with the strict, discipline, tight checking Whitby squad.  Again, one sensed a good bounce now and then, the result would be different.  Whitby was having none of that and efficiently disposed of a spirited Turtle Islanders squad 3-1.

The Bronze Medal game in the early afternoon saw Toronto and Niagara trade plenty of scoring chances only to be shut down by Danielle and Raven respectively.  Toronto won the consolation game with a couple of surprise shots 2-0.

This set the stage for another Grand River & Whitby final.  When an irresistible force meets an immovable object version 2.0.

While the Attack were the odds on favourite based on their previous meeting with the Rush, a one game, winner takes all, anything goes, pedal to the metal… well you get the idea.  The game did not disappoint.

In the first the teams traded goals and hits back and forth, many good chances efficiently turned away by a couple of good goalies.  At the end of 1, the score was tense 2-2.  The arena was abuzz, noisey, wanting more.

Anyone watching Grand River this year will notice that they go on some quick runs, where they might bury a few and when they did, it often led to the W-column.  The second period was the proof: a 4 goal run to chase the rookie Rush goalie out of the net.  It was a they’re-hot-you’re-not sort of goalie change.  The rookie has been steady all season and got the Rush into the final.  With the veteran in nets, stopping everything thrown at her, the Rush used their time wisely in the third to start chipping away at the Grand River lead.  One goal, then another!  Suddenly it wasn’t so inevitable, something could happen! Game on! And back and forth they went.

The Attack dug down deep and played the most disciplined shut-down game they could muster, repelling wave after wave of swarming Rush.  The vet Attack goalie calmly holding the fort, dishing the ball off confidently, anchoring a defence under pressure.  We’ve seen this before:, last year’s provincial final!

Int he end, Grand River won 6-4.  At the buzzer the Attack players clamoured off the bench to congratulate one another, happy and jubilant that once again they are the reigning champs.  Best in the country.  Best in the world.

Congratulations to both teams, to all teams in fact, on another wonderful season even if it did not meet all expectations.  Sometimes life’s like that.

In the end, the league didn’t fly apart, it moved along like it always has, and like it always will. There will be disappointments, for sure, hard lessons learned in future days, but the main hope is the knowledge that there is always next year.